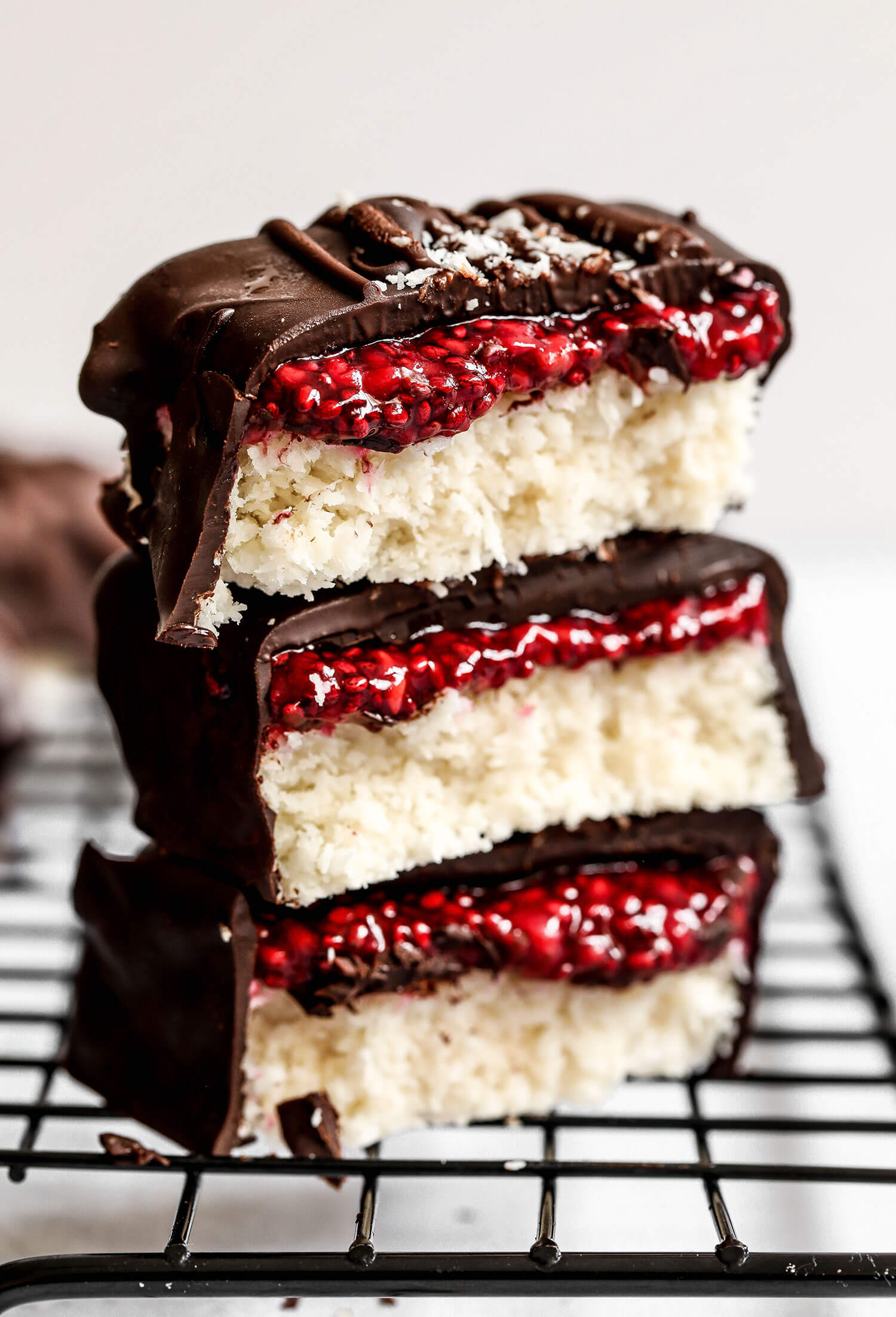 A creamy coconutty bar with a layer of raspberry jam all dipped in chocolate – these vegan raspberry bounty bars are like little bites of heaven!

You may have seen the memes on social media of the Celebrations chocolate box selection making fun of the fact that bounty bars are the chocolates that get left behind because no one likes them. I can’t relate to those memes at all because I LOVE bounty bars!

I especially like the dark chocolate covered ones! I really think the creaminess of the coconut centre goes so well with the intense flavour of the dark chocolate shell. Bounties were always what I would go for when presented with a full box of Celebrations. I still can’t get my head around why people make fun of and hate on them so much!

This inspired me to create my own version of the dark chocolate bounty bar, but with a twist. The twist being a layer of slightly sweet and tart raspberry jam layer 😋👌🏼. I have made a blueberry bounty bars in the past, which was so well received, so I thought I’d create another variation. Still vegan, gluten-free and no-bake! This recipe is also nut-free and soy-free for those of you with allergies to either of those ingredients.

Start off by making the jam – place the raspberries, maple syrup and lemon juice in a small sauce pan. Cook over a medium heat while mashing the raspberries with the back of a wooden spoon. Once you have a sauce like consistency, take off the heat and mix in the chia seeds. Set to one side and allow to cool completely.
Add the desiccated coconut to a large bowl with a pinch of salt, then pour over the maple syrup, melted creamed coconut and coconut milk. Mix to combine.
Transfer into a square 9″x9″ cake tin lined with baking paper. Press the mixture down to create an even layer. Freeze for 30 minutes.
Spread the cooled jam over the coconut layer, then freeze again until set (around 2 hours).
Slice into bars, then dip in the melted chocolate. Allow the chocolate to set before serving.
Store in an air-tight container in the fridge for up to 4 days. Enjoy!