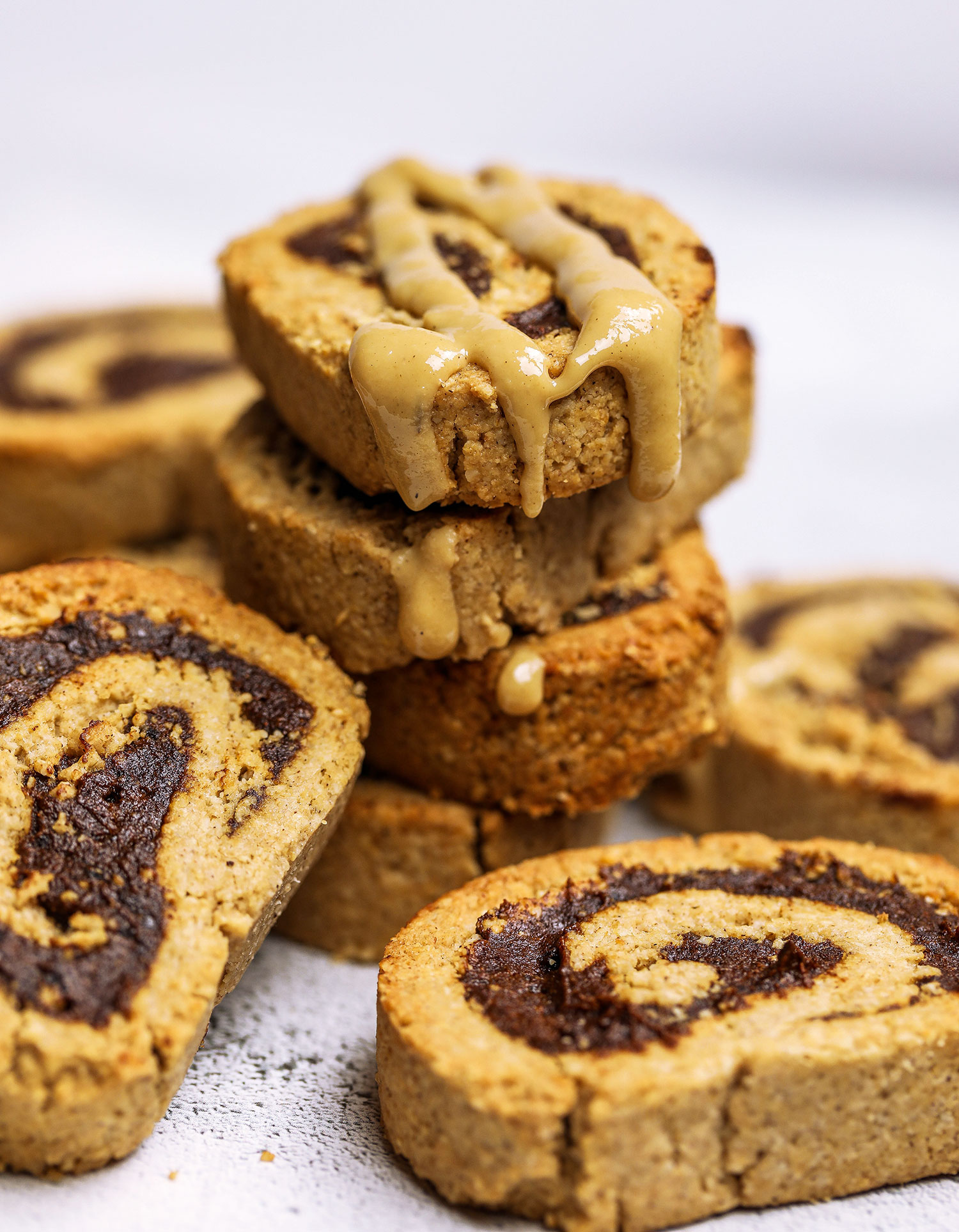 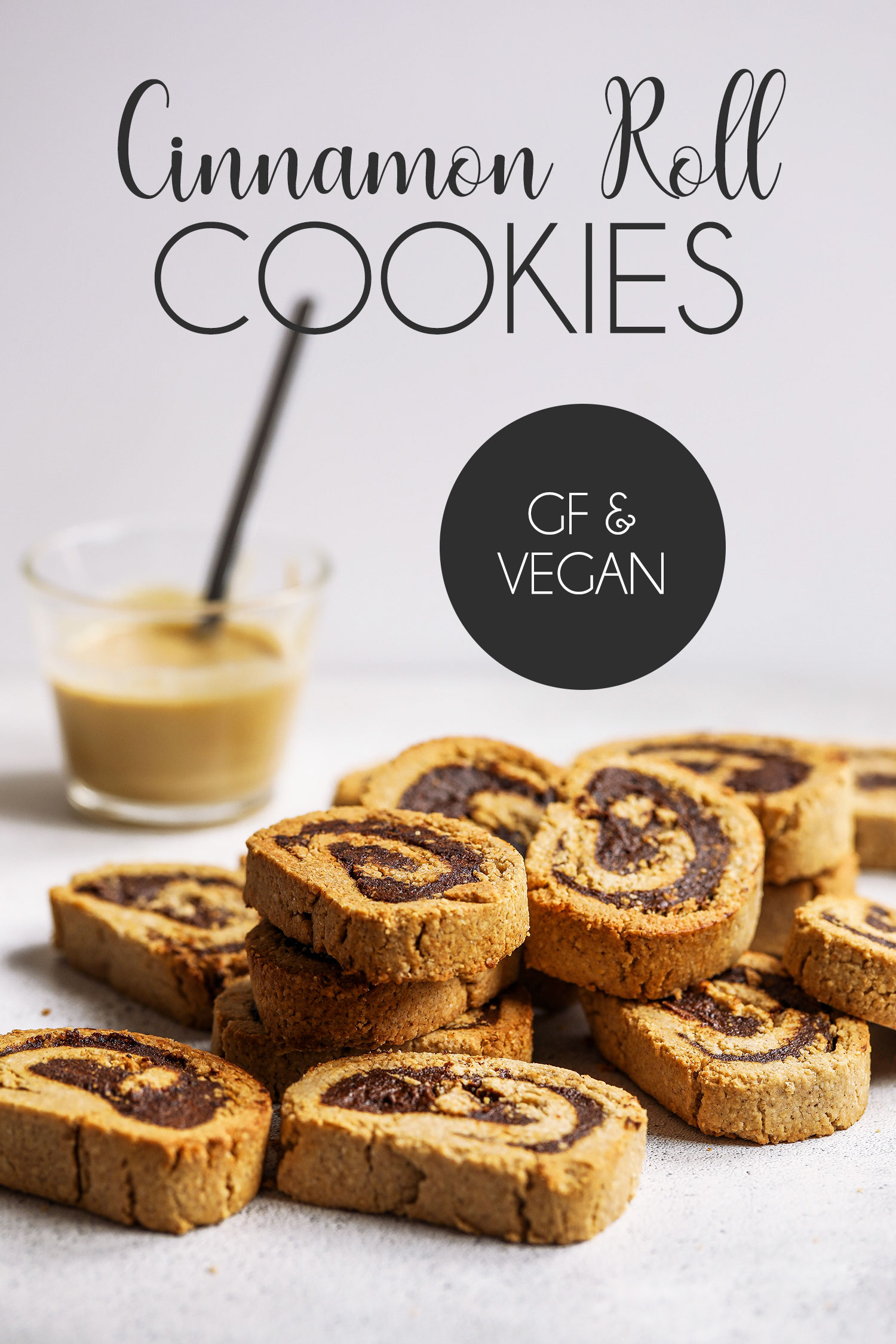 Cinnamon rolls with a twist, or are they cinnamon cookies with a twist? I’m not sure, but what I do know is that these vegan gluten-free cinnamon roll cookies are absolutely delicious and super addictive. Having only one is not an option! 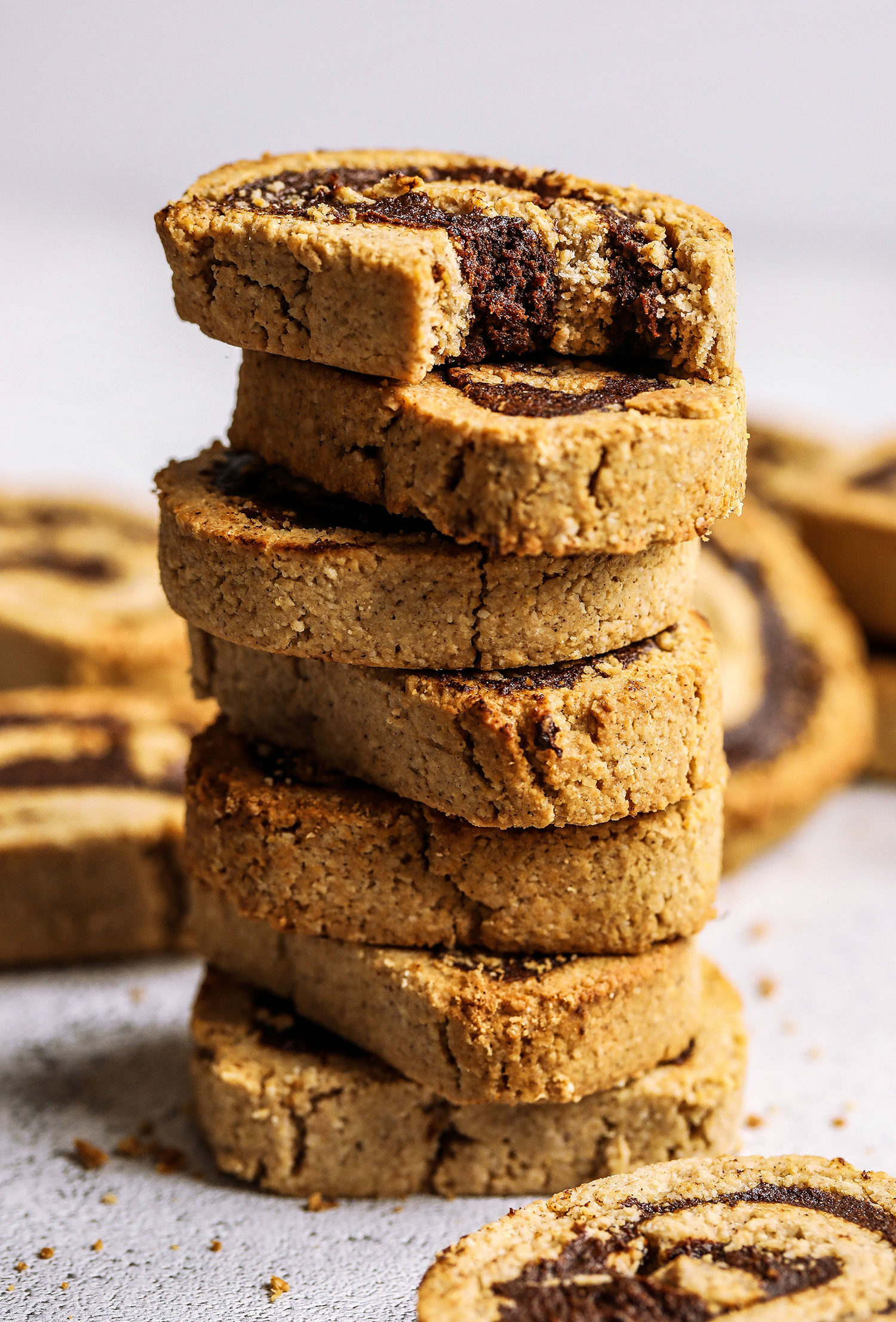 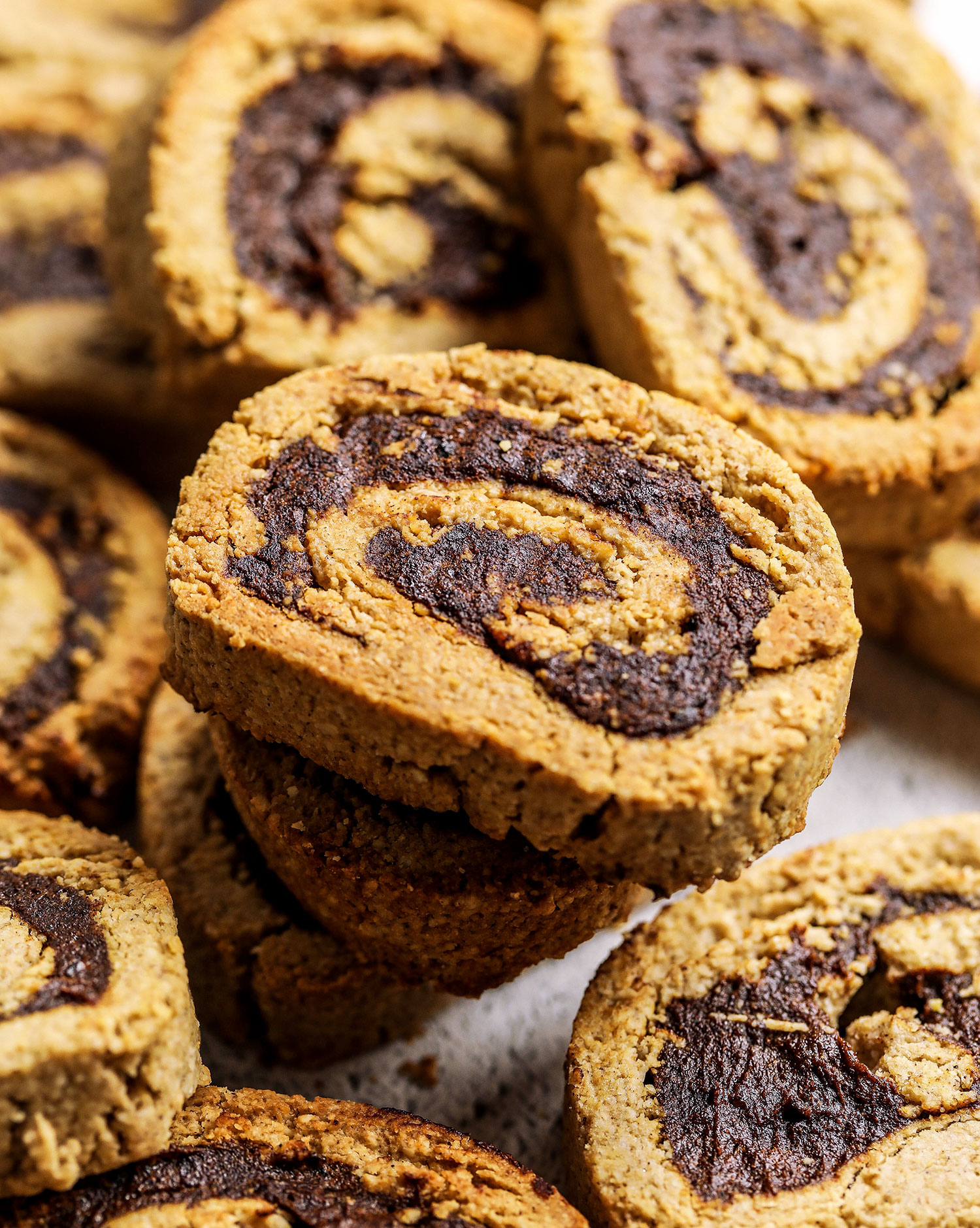 I always enjoy baking with spices, but even more do during winter and especially closer to Christmas time. I grew up not celebrating Christmas, even though I’m half English, I grew up in Iraq, a muslim country and there weren’t many English/Christian people around us, so there didn’t seem much of a point to celebrate it. Also, I grew up in a third world, war torn country that was subjected to sanctions that made it difficult for even middle class families to live comfortably. Celebrating something like Christmas was just not a priority.

Since moving to the UK, Christmas has always felt like such a comforting time of year. It’s the complete opposite to my life growing up. It’s cold, cosy, calm and I just get this overall sense of peacefulness and safety. I love this feeling, so anything that reminds me of Christmas makes me happy. Spices including things like cinnamon are definitely one of those things that remind me of Christmas. 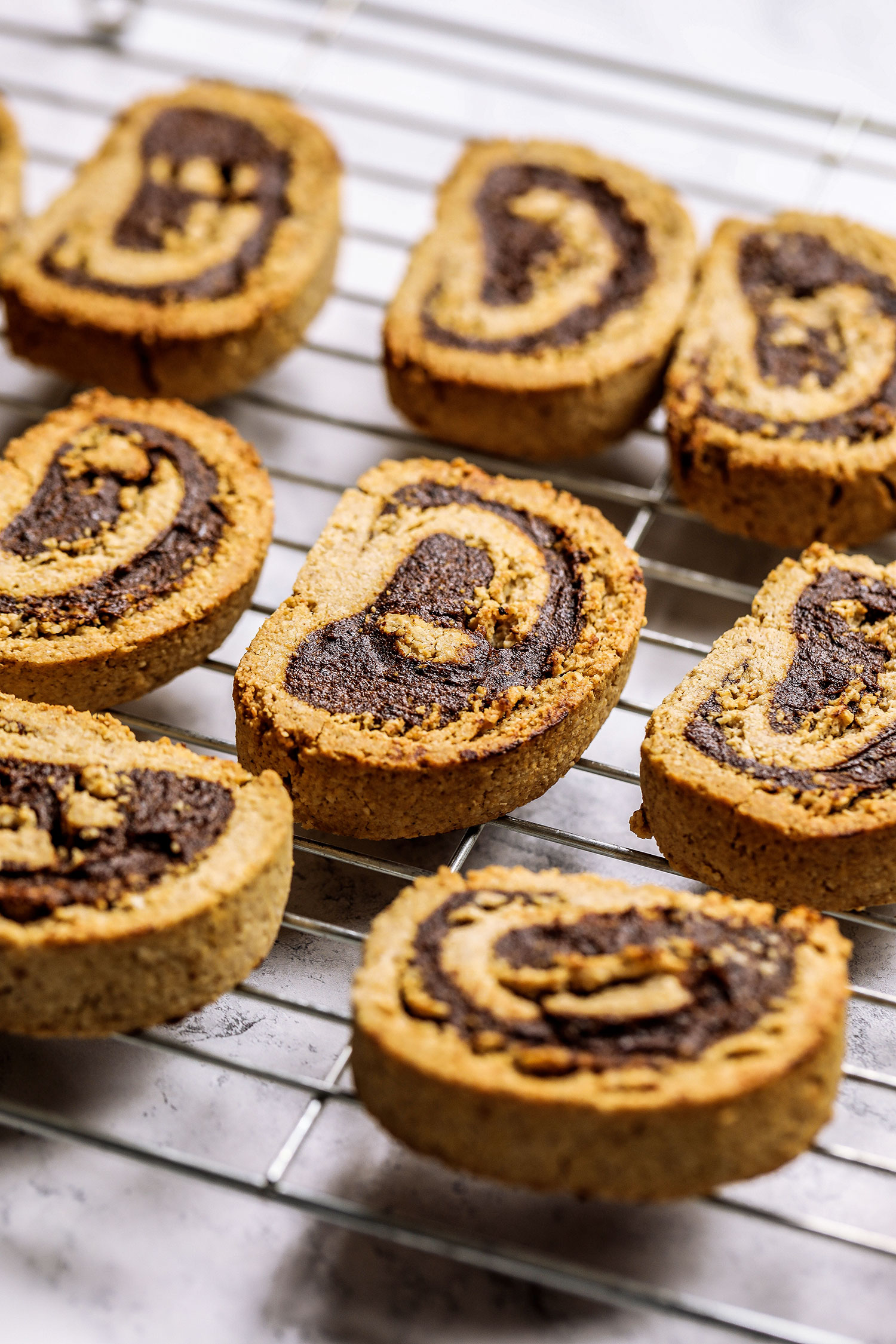 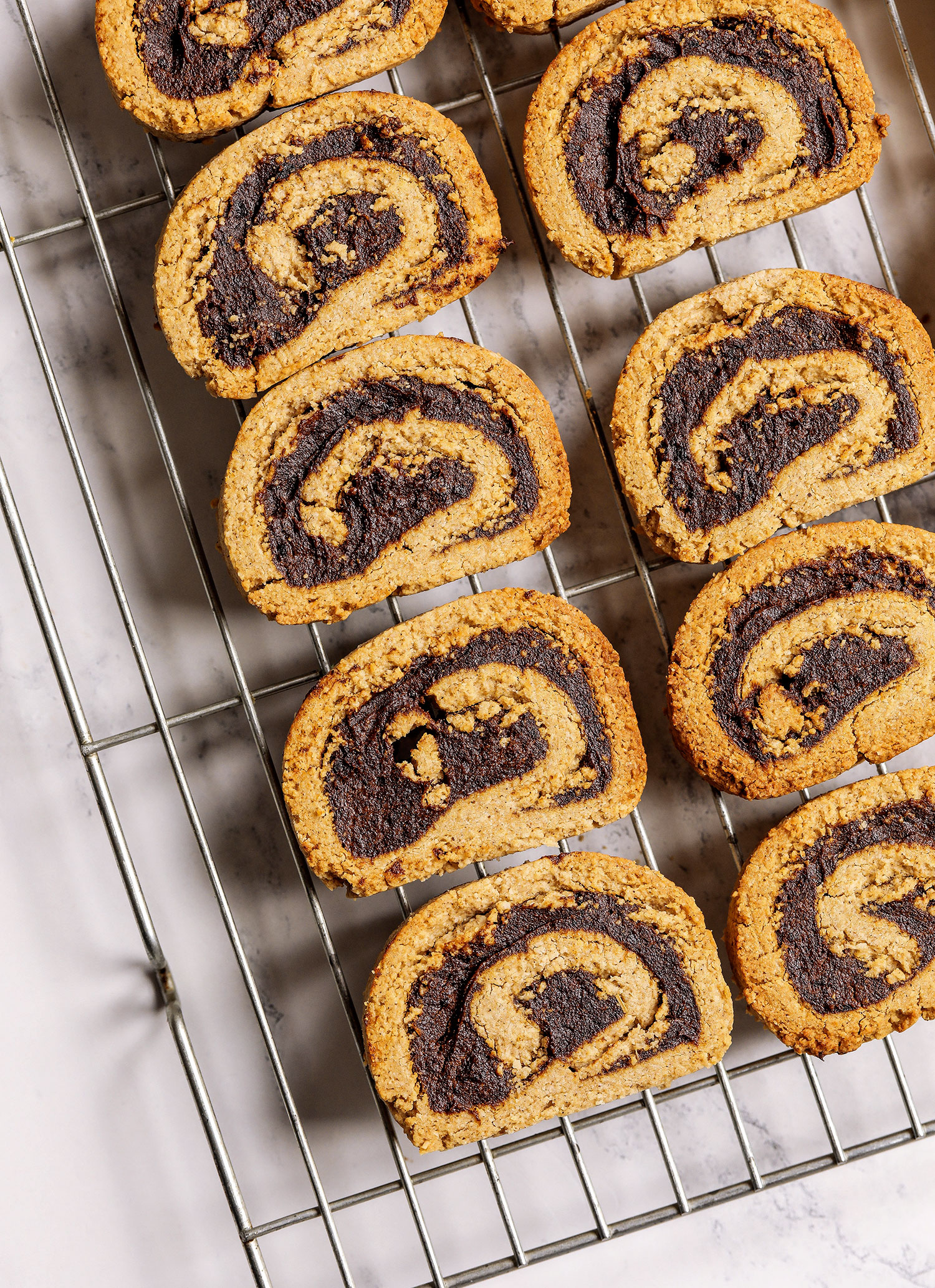 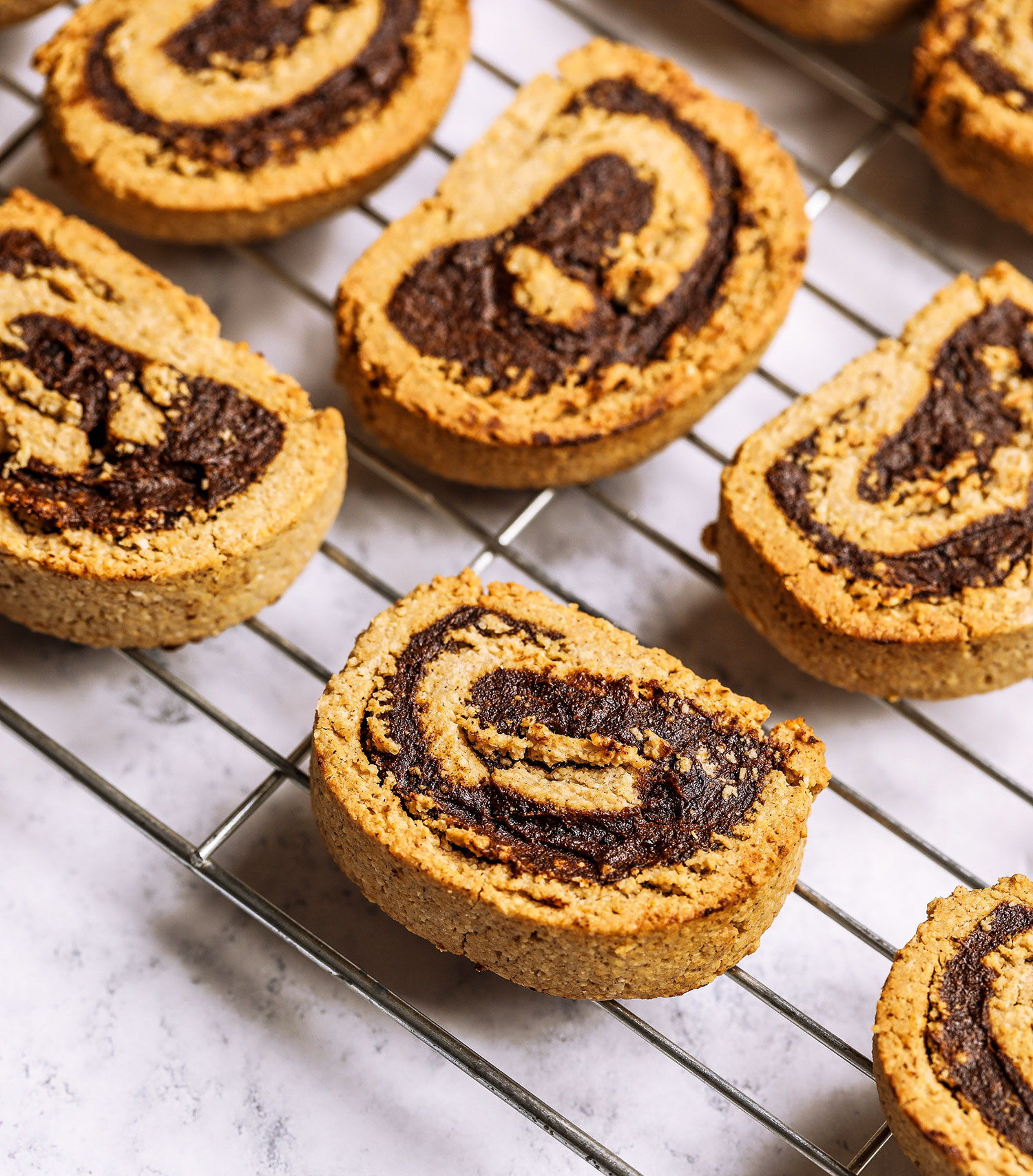 These vegan gluten-free cinnamon roll cookies also remind me of Kleicha, an Iraqi date cookie that was my absolute favourite treat growing up. Actually, it still is! So I would say these cookies are more of a mishmash of Kleicha and cinnamon rolls. I accidentally merged a cookie from the east with a sweet roll from the west and I have to say I think the result turned out wonderful. A crumbly with a sweet cinnamony swirl. 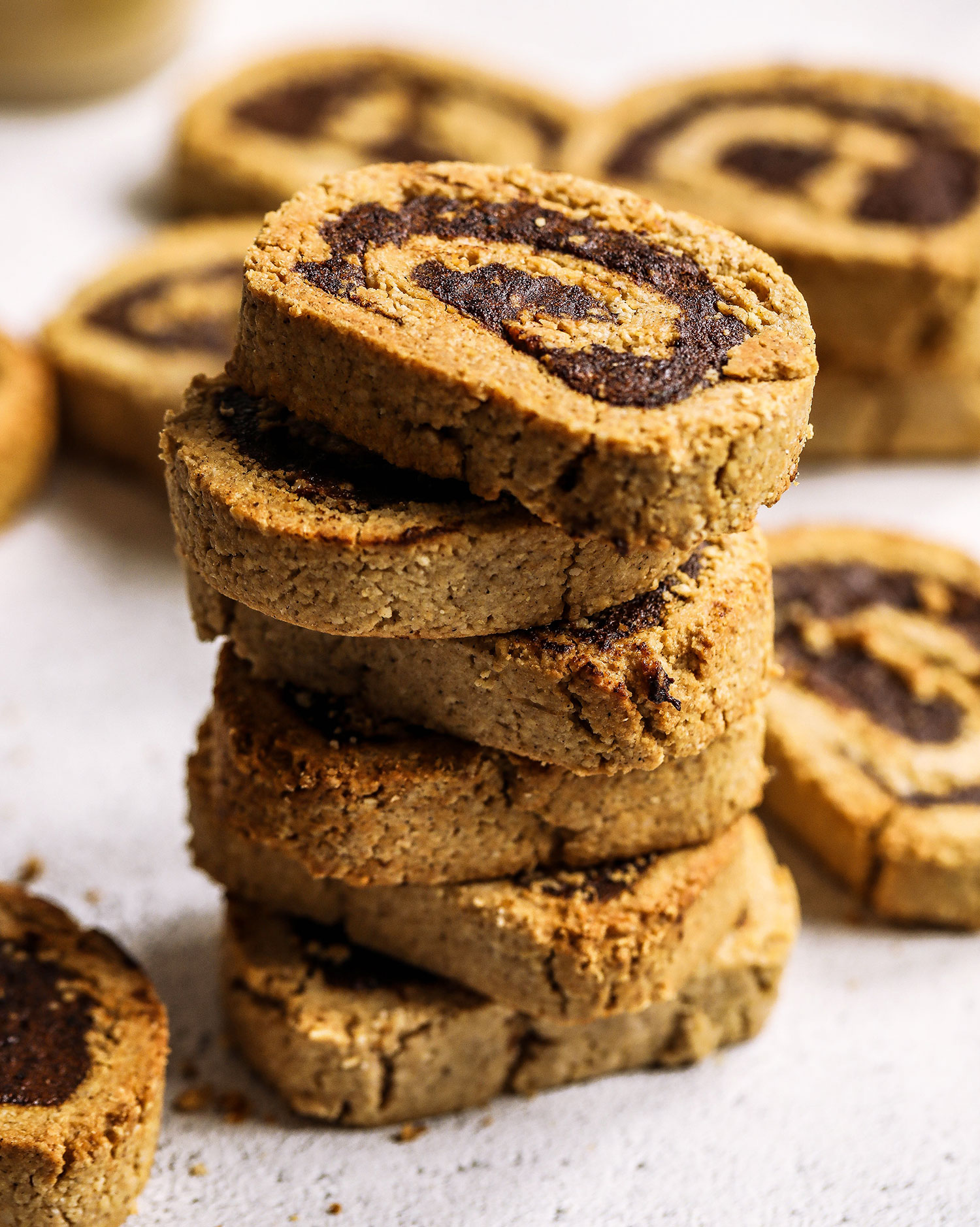 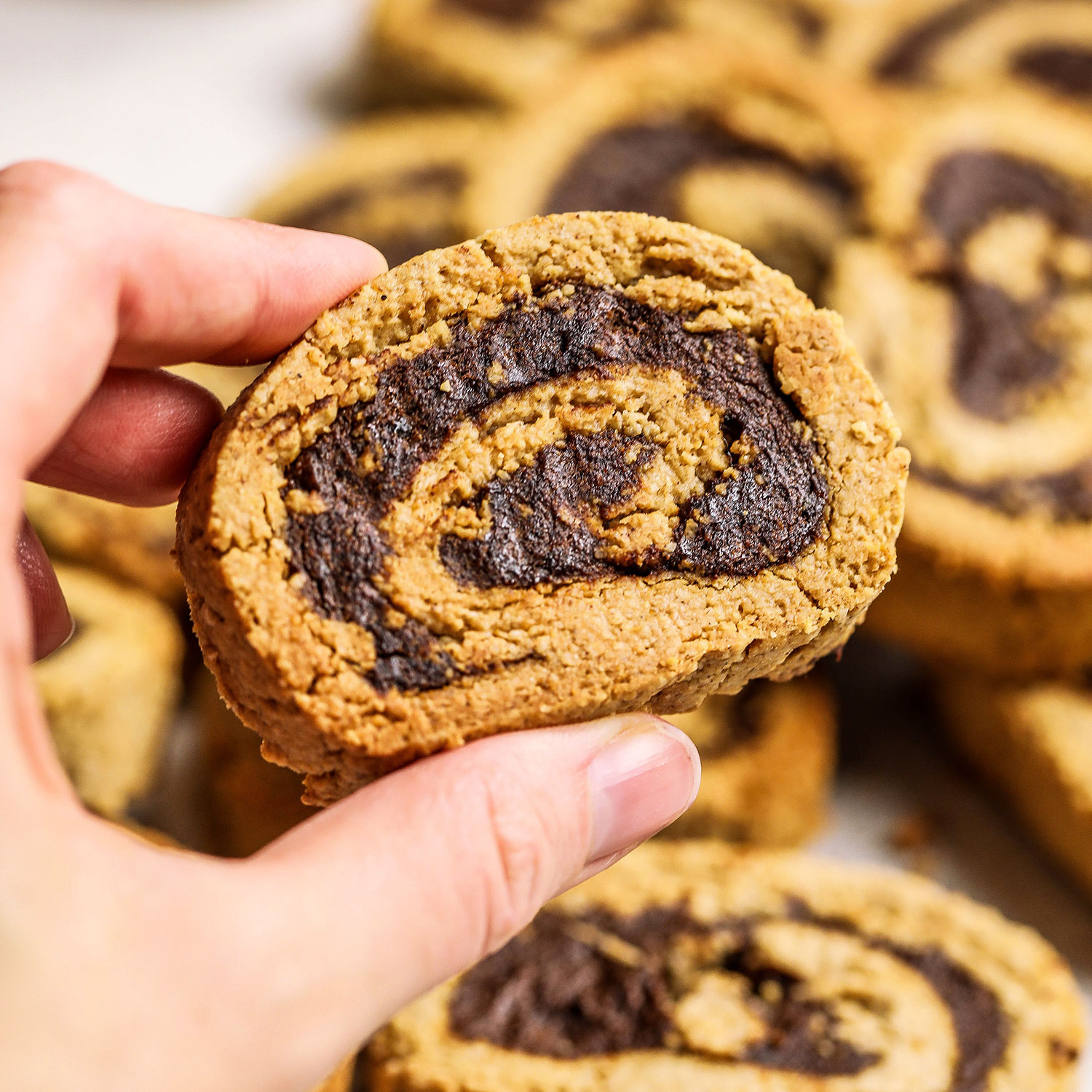 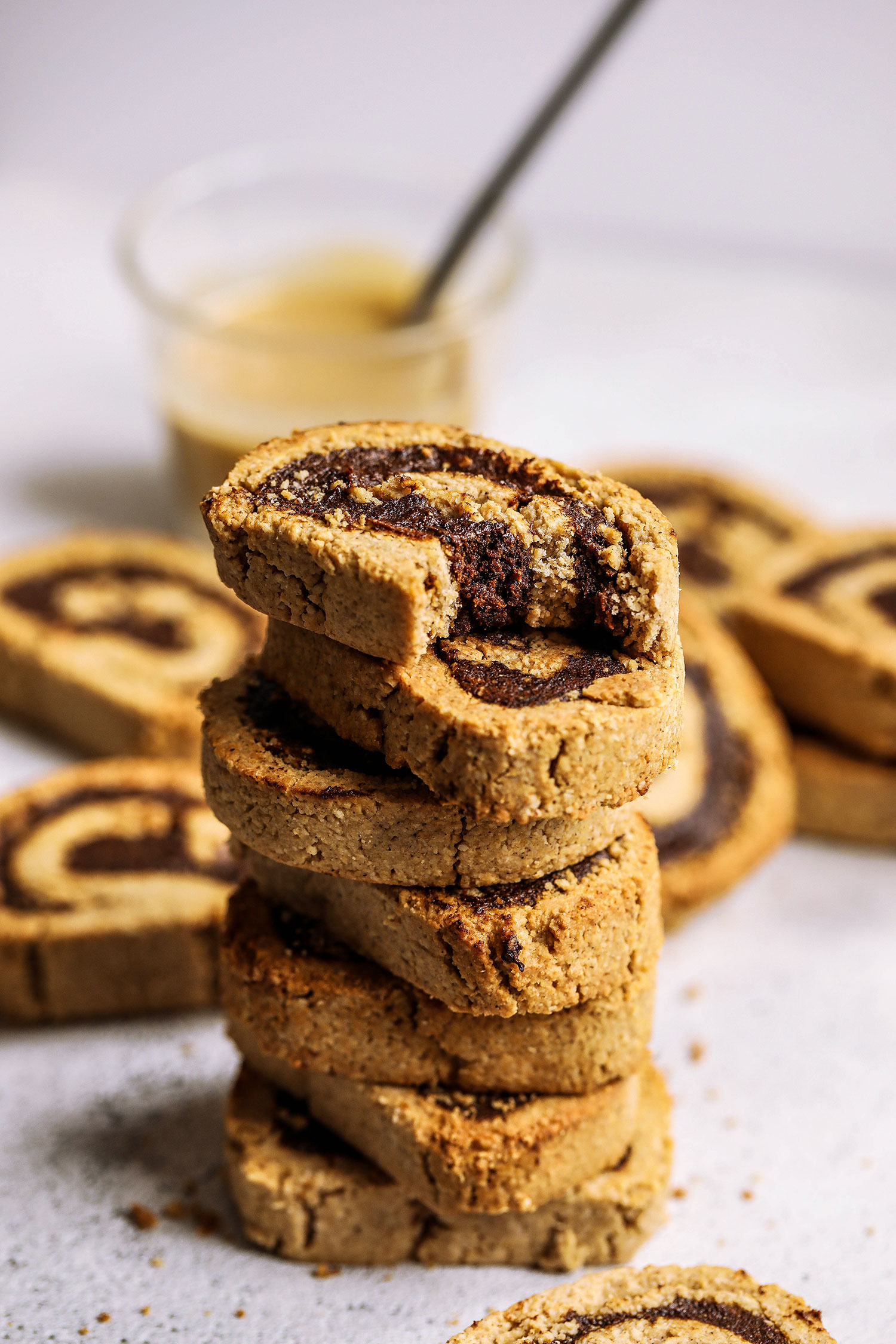 As the title suggests, these cinnamon roll cookies are both vegan and gluten-free (if you use gluten-free oats) and they’re much healthier than your average cookie and certainly a lot healthier than the traditional cinnamon roll. The base is made up of oats, ground almonds and a bit of maple and oil to help the dough hold together. The filling is a mixture of dates, milk a bit of oil and lots of cinnamon! 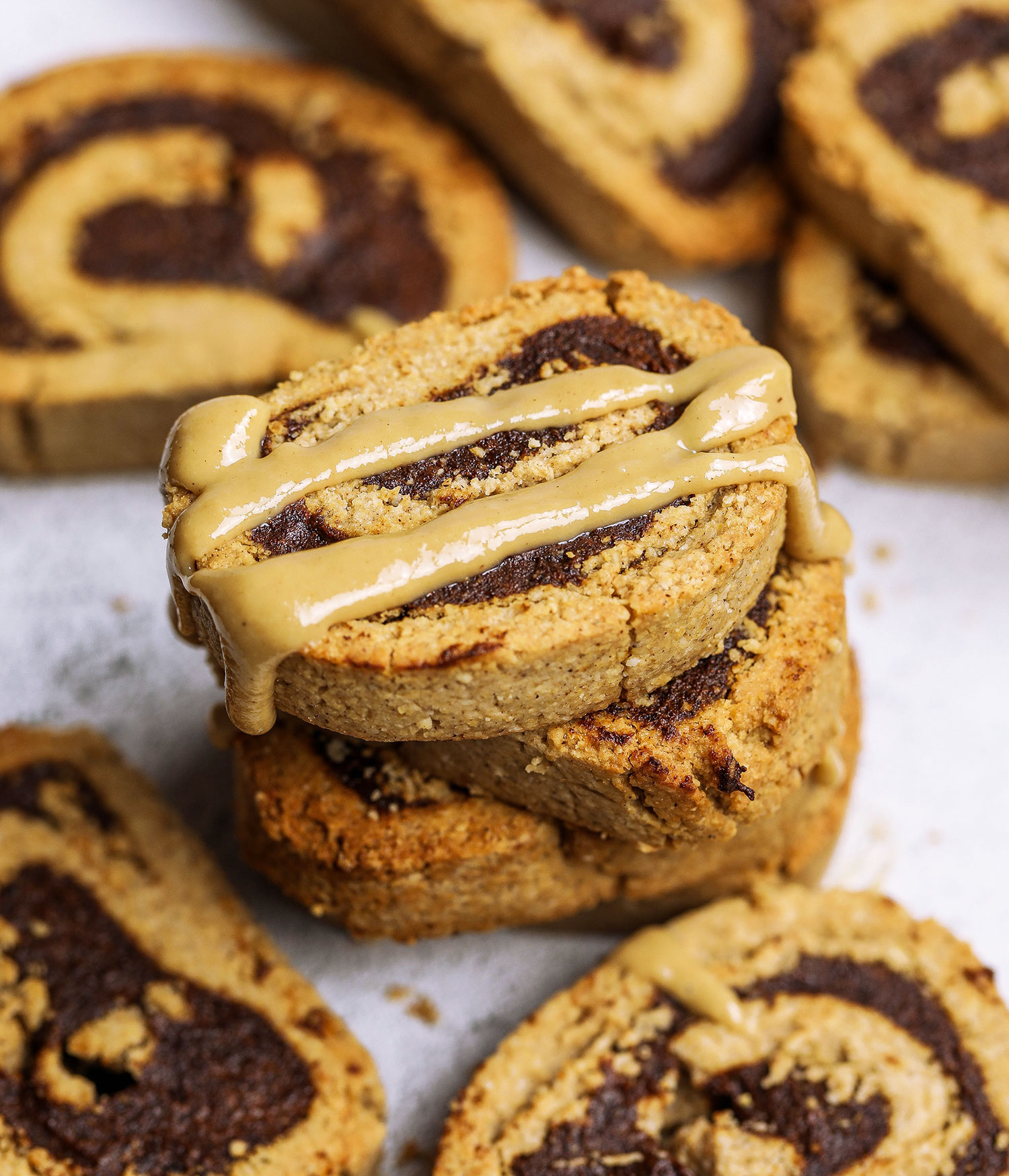 Initially I intended these cookies to be a ‘no bake cinnamon roll’, but then decided to bake them to see how they would turn out and I preferred them so much more baked. But you have the option of skipping the baking step and leaving them no-bake, which is also absolutely delish! I just prefer that added crunch as a result of baking. Below is a picture of them before I decided to bake them. 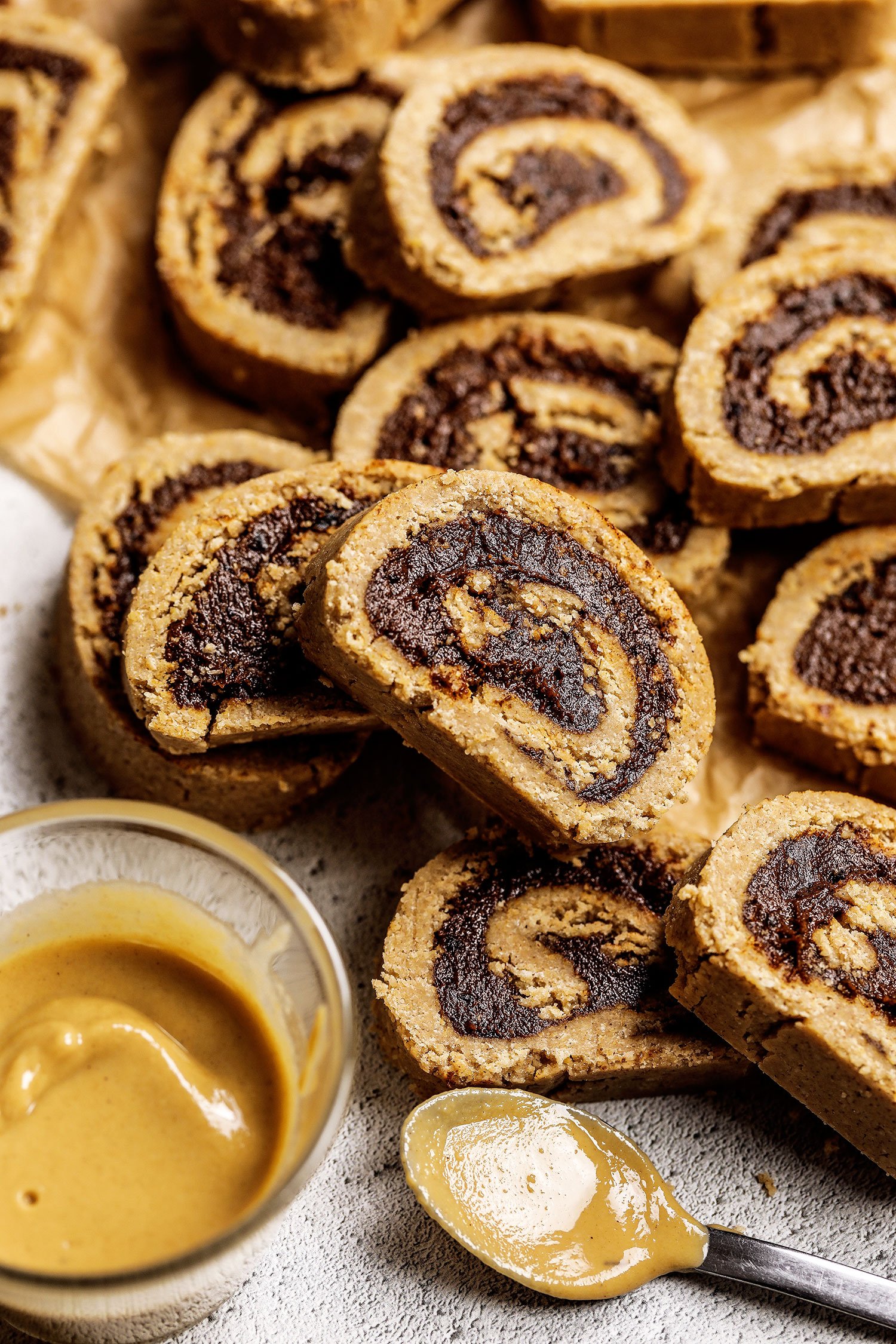 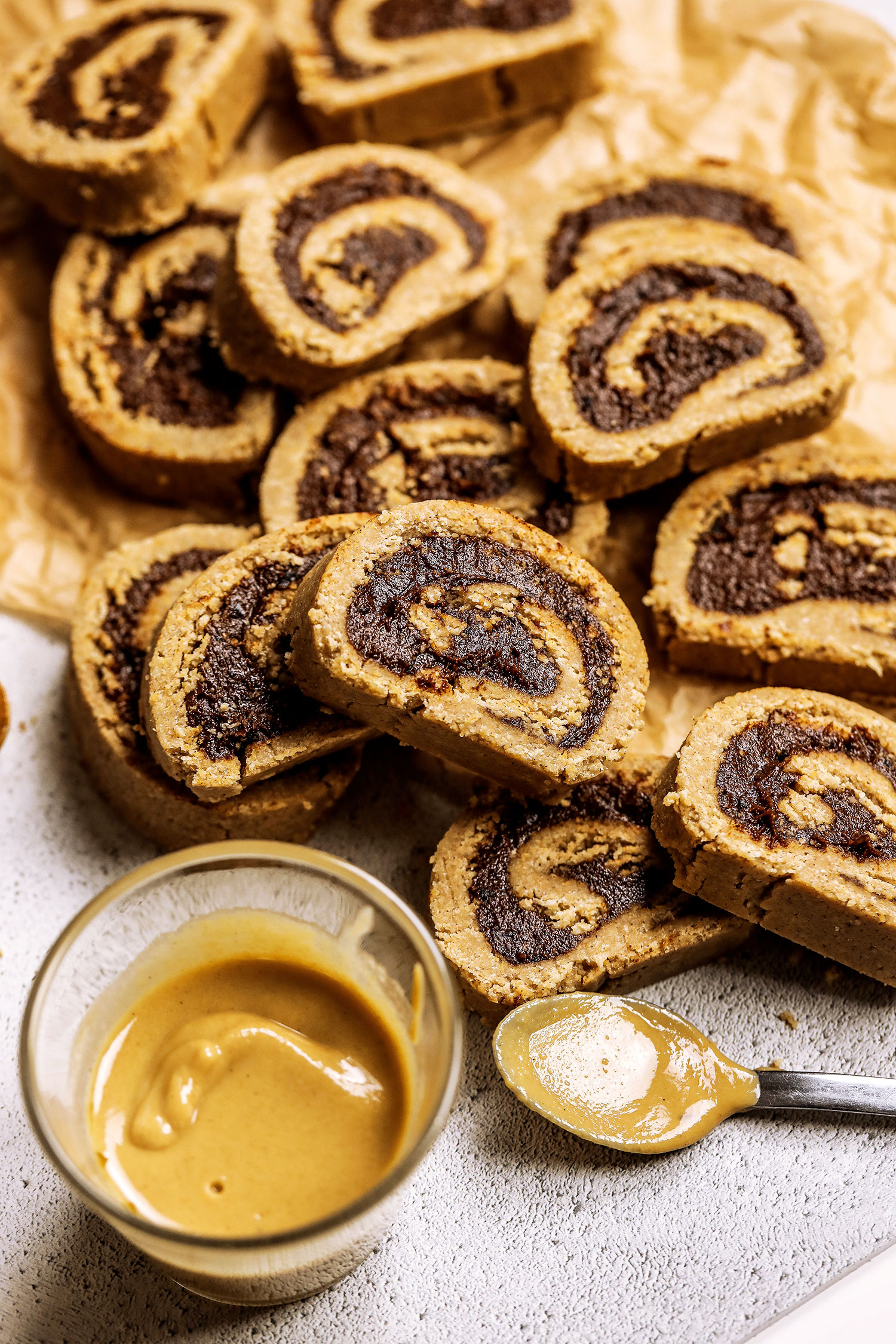 Preheat your oven to 180C/160C fan/350F
Add all the filling ingredients into a blender and blend on high until you have a smooth mixture that’s not too sticky.
In a large bowl, mix together the oat flour, ground almonds, cinnamon and salt. Pour in the maple syrup and coconut oil and mix to combine.
Chill the dough in the fridge for 30 minutes to allow the coconut oil to solidify and make it easier to work with.
Roll the dough out into a rectangle (about 1/4″ thickness) between two sheets of parchment paper.
Spread the cinnamon date mixture evenly over the rolled dough, then carefully start rolling into a tight cylinder. Place in the freezer for 15-30 minutes then cut into cookies.
Arrange on a baking tray lined with parchment paper and bake for 15-20 minutes until the edges are golden brown.
Leave to cool completely and enjoy!