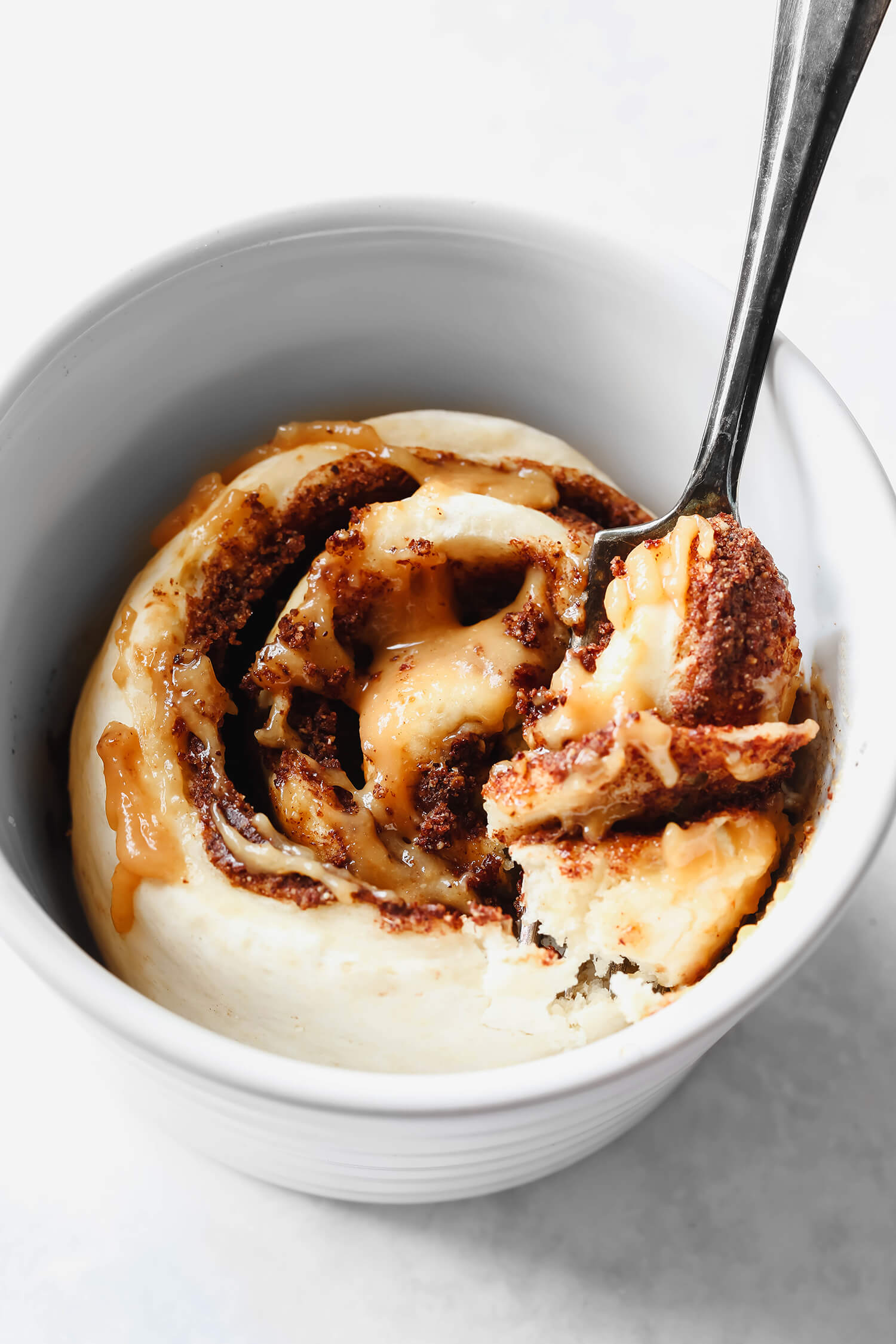 A delicious & warming treat that’s ready in no time! This single serving vegan cinnamon roll is the perfect treat when you’re craving something comforting that’s not overly indulgent.

I’ve made my fair share of single-serving recipes that you can make in the microwave in a couple of minutes. Recipes like:

I love single serving recipes. I lived on my own throughout lockdown last year, so it was a challenge creating regular recipe content without any food waste. I steered clear from any major desserts like cakes and tray bakes because I simply wouldn’t have been able to eat them and I didn’t have it in me to make something knowing most of it will go in the bin. The only way around that was to focus on small batch recipes and desserts for one!

Even since I moved in with my partner this April, it’s just us two, so creating big recipes is still tricky and if I do want to make a big dessert I have to plan it so it coincides with visiting family/friends so I can take most of it with me. That way nothing goes so waste.

Anyway, enough about the dilemmas of being a recipe developer, you’re here for one thing only and that’s how to make this single serving vegan cinnamon roll!

I must admit that plain white flour rarely gets used in my kitchen. I prefer using healthier options like oats, ground almonds, gram flour and buckwheat flour. I tried making this single serve vegan cinnamon roll using a mixture of different flours, but I couldn’t get a consistency I was happy with. The best other option I tried with acceptable results was wholemeal spelt flour, but even then it didn’t turn out as nice as when using plain flour. So I made an exception to achieve a fluffy delicious cinnamon roll without yeast!

To make it slightly healthier, I used peanut butter in the centre with a little bit of coconut oil instead of butter/vegetable oil spread. I did use white sugar, which again I try to steer clear of, but the recipe will also work with sugar-free sweeteners like xylitol if you want to reduce the calories.

This single serving vegan cinnamon roll is the perfect dessert if you’re making a treat for one or for yourself and a loved one. No waste left behind and it takes less time to make than a traditional cinnamon roll recipe. You definitely need to try this one!

Mix the flour and baking powder in a bowl, then pour in the milk. Combine to form a dough.
Roll it into a long strip about 4 inches wide.
Mix the the peanut butter and coconut oil in a bowl until combined, then mix in the cinnamon and sugar to form a paste.
Spread evenly over the dough, then roll and place in a lightly oiled ramekin.
Bake in a preheated oven at 180C/160C fan for 12-15 minutes.
To make the glaze, mix 1/2 tbsp peanut butter with 1 tsp maple syrup and 1-2 tbsp plant milk until smooth. Drizzle on top and enjoy!

* if it’s a hot day and the coconut oil is not solid at room temperature, place 1/2 tbsp in a small bowl in the fridge. If you use melted coconut oil the mixture will be too difficult to spread over the dough.