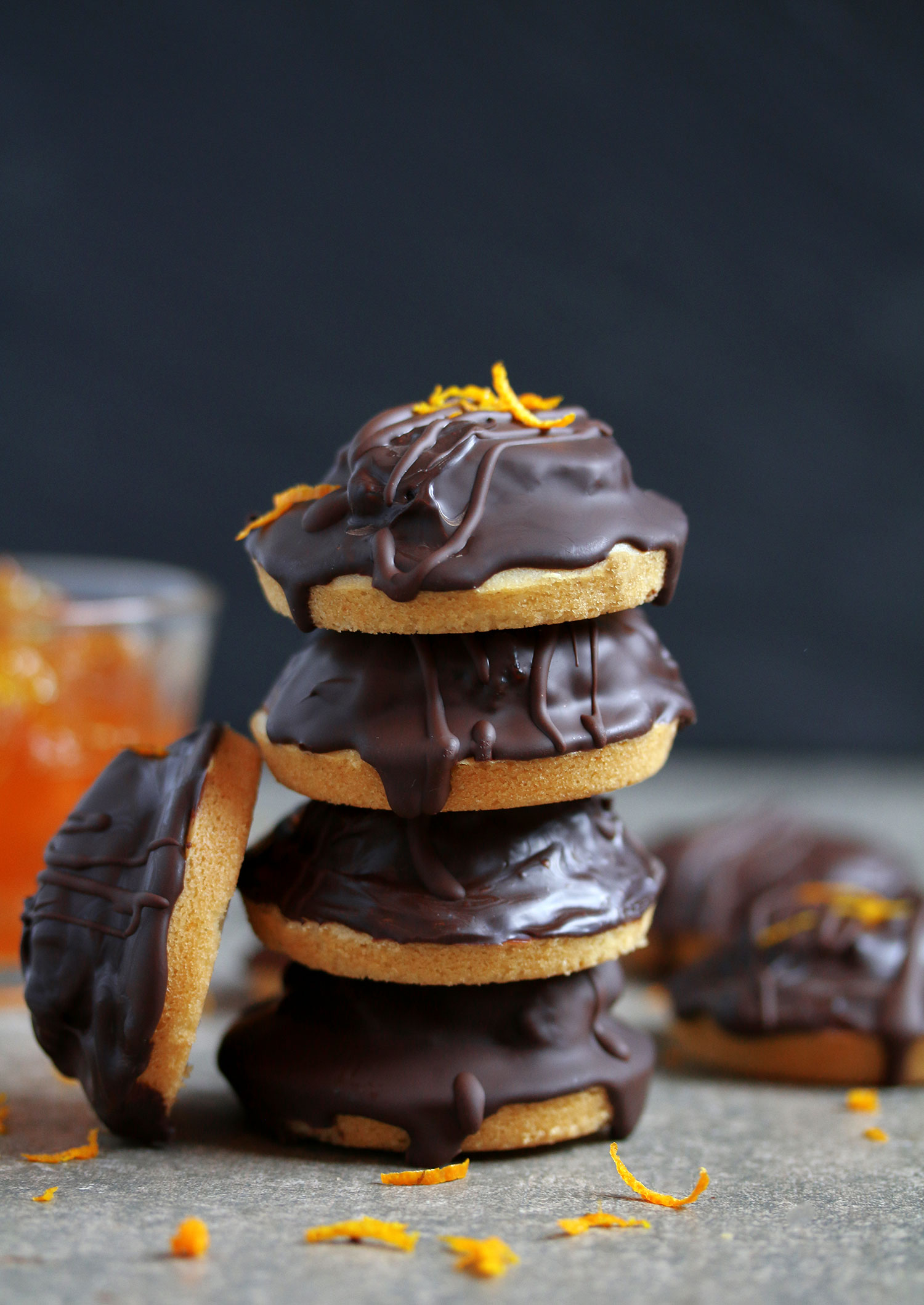 Jaffa cakes are one of those treats that I missed the most since I started avoiding dairy and gluten. Once a Jaffa Cake pack was opened, there was no stopping me. I would gobble the lot! They’re such a comforting snack, especially with a nice warm cup of tea.

What makes them even more special is that all Jaffa Cakes are produced at a McVitie’s factory in Stockport, which is not too far away from where I live and around the corner from my parent’s house! 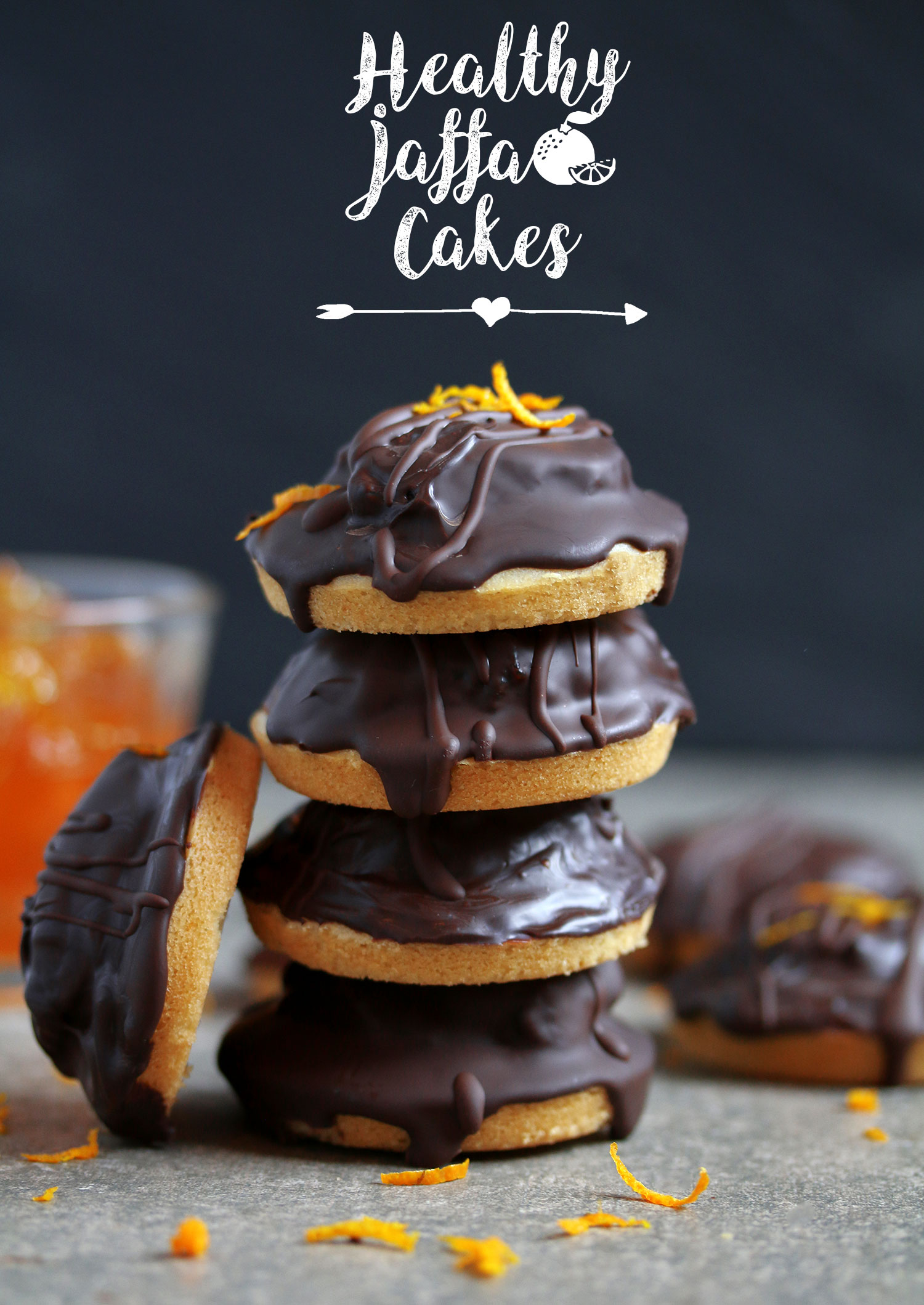 I posted a shot of these vegan & gluten-free Jaffa Cakes on my Instagram feed mentioning that I wasn’t sure whether they were only available and sold here in the UK. Many of you informed me that the magic that is Jaffa Cakes have crossed the pond and made their way to different countries around the world like Greece, Germany, Poland, Australia, France…the list goes on! Some of you told me that you have something similar under a different name (Pim’s biscuits?). Apparently in some places like Portugal you can also get raspberry flavour (OMG!) I would definitely love to try one of those!

So it’s safe to say that the phenomena that is a Jaffa Cake has made its way around the world and straight into many of your hearts. I guess it would have been selfish for us here in the UK to keep it to ourselves. Sharing is caring, right? 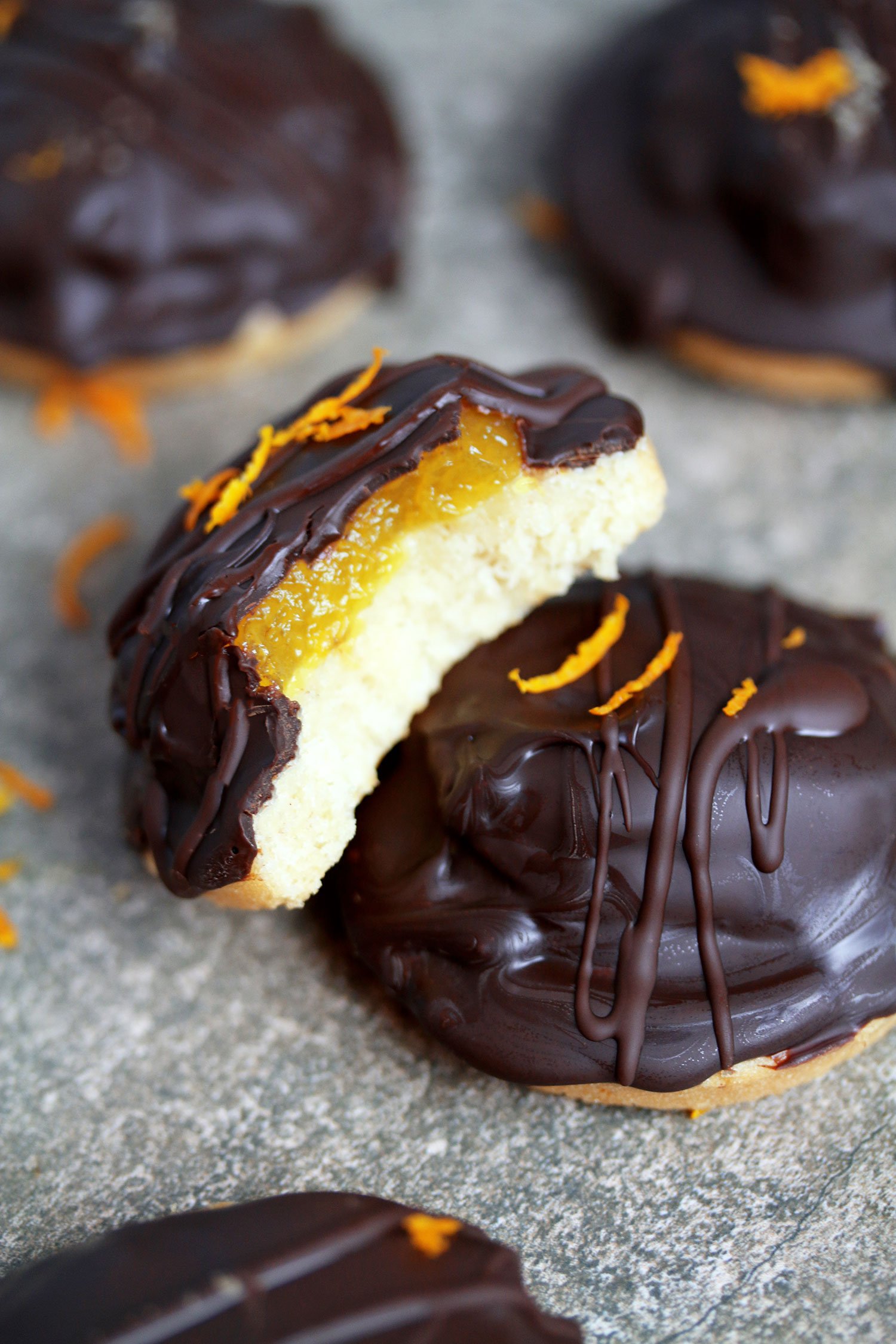 In case you don’t know what a Jaffa Cake is – it’s a small cake that’s shaped like a biscuit (cookie). Made up of a sponge layer, an orange jelly filling, and chocolate topping. Some still debate whether they should be classed as a biscuit or a mini cake. I think the name gives it away, and the texture is definitely more like cake than biscuit. The only thing about it that resembles a biscuit is the size, shape and the fact that they come in a packs just like biscuits. Oh and they’re usually sold in the biscuit aisle which adds to the confusion.

Regardless of whether you think it’s a biscuit or a cake, something that we can all agree on is that Jaffa Cakes are delicious! 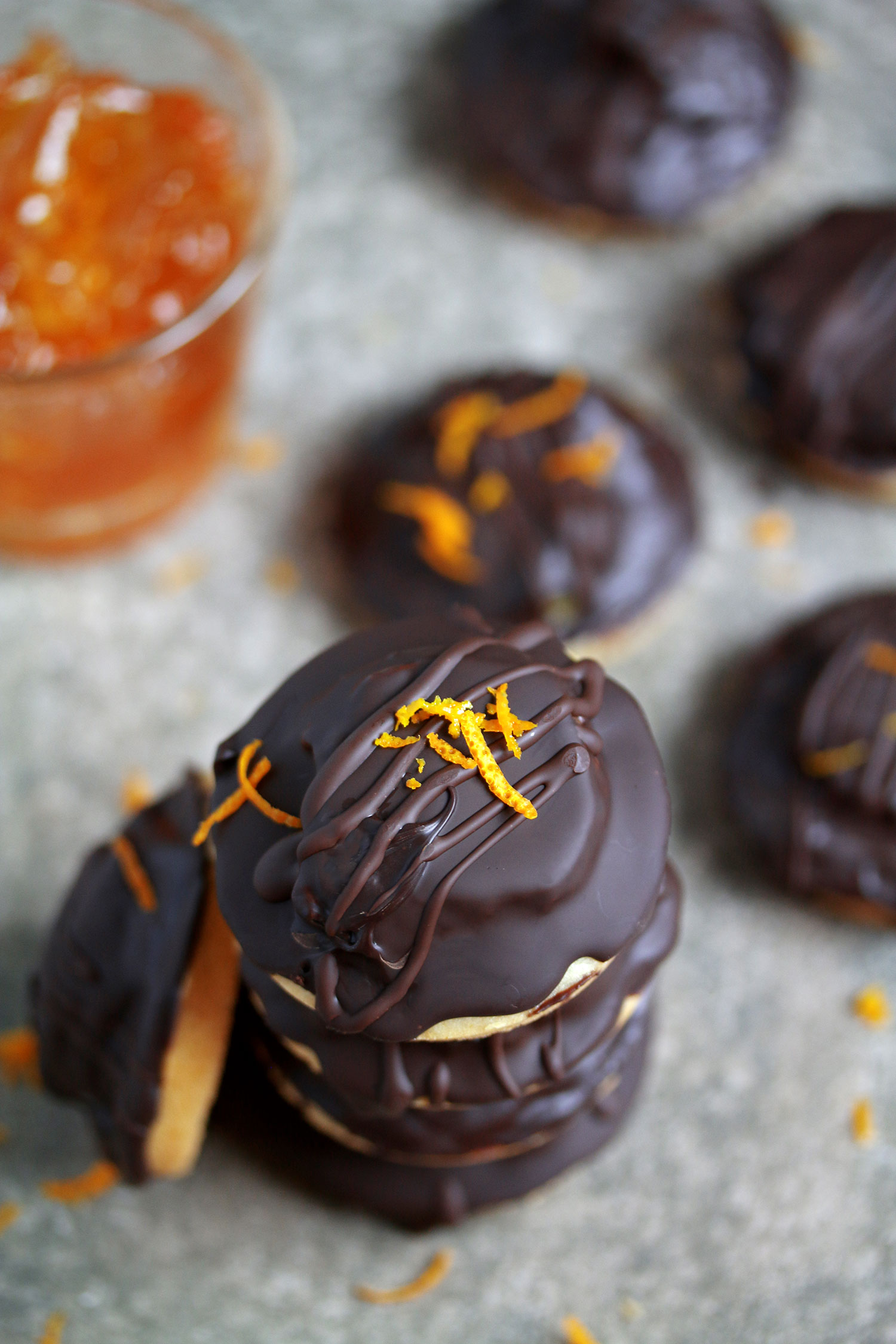 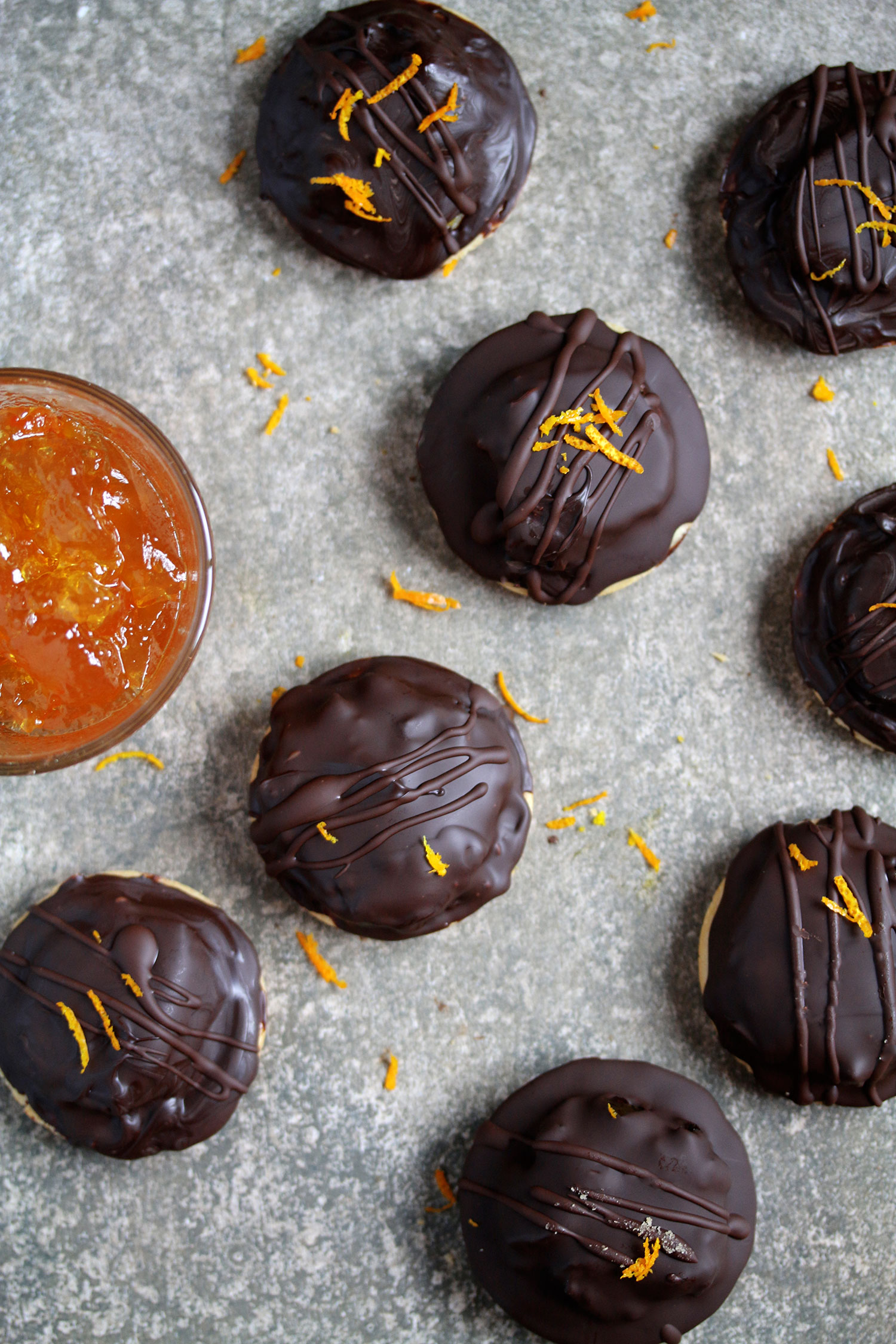 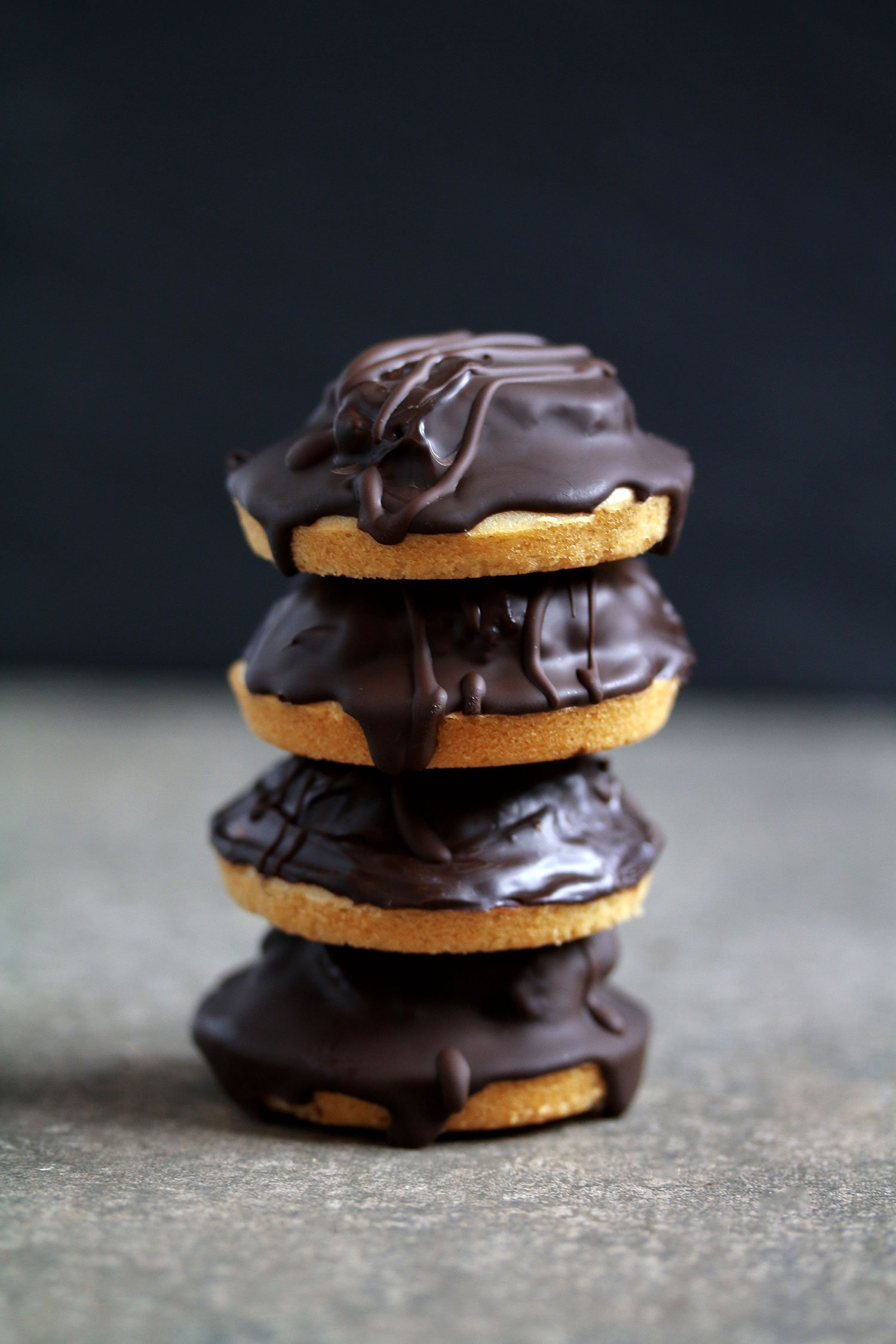 I had to play around with this vegan & gluten-free Jaffa Cake recipe a few times before I was happy with it. First I couldn’t get the texture of the base right, once I did I then had to figure out the best way to make the orange centre. I also wanted to find alternatives to make them as easy as possible to make!

So I came up with a simple gluten-free, vegan base of gluten-free flour, ground almonds, coconut oil, milk and maple syrup. For the middle layer, I played around with a jelly recipe a couple of times and I’m pleased with the results! I also tried using shop bought marmalade to make the recipe easier with less steps to follow, and that worked also. I think using the orange jelly make these Jaffa Cakes taste more like the original, but the hubby thought using the marmalade tasted better. If you can make both, I would love to know which version you thought worked best!

Now all that’s left to do is for you to rush off and make them! Happy baking 😀

For the orange layer

1/2 cup (120ml) orange juice
1 tbsp maple syrup
1 tbsp orange zest
1/2 tsp agar agar
Alternatively you can use homemade or shop bought marmalade instead of making the jelly, although I think the jelly was a lot closer to the real thing.

For the chocolate topping

Preheat your oven to 180*C (160*C fan assisted)/ 350*F
In a large bowl, mix together the flour, ground almonds, baking powder and salt.
Pour in the coconut oil, maple and milk. Mix to combine.
Lightly oil a muffin tray and transfer about 1.5-2 tbsp of the batter into each of the muffin tray cups.
Bake for 10 minutes. Leave to cool completely.

To make the orange jelly

Add all the jelly ingredients into a small saucepan and cook on a medium/high heat mixing continuously until it starts to boil. Take off the heat, pour into a wide bowl and leave to cool. Once the jelly has cooled down, transfer into the fridge to speed up the setting process.

Cut out rings from the jelly, smaller than the width of the base.
Top each base with a jelly ring (or a small tsp of marmalade if you don’t want to make the jelly), then drizzle some melted chocolate on top. I find if u leave the chocolate to cool once melted it’s a lot easier to control drizzling the chocolate on top.
Transfer to the fridge and leave for about 15 minutes until the chocolate has set

Store in an air tight container at room temperature for 3 days.