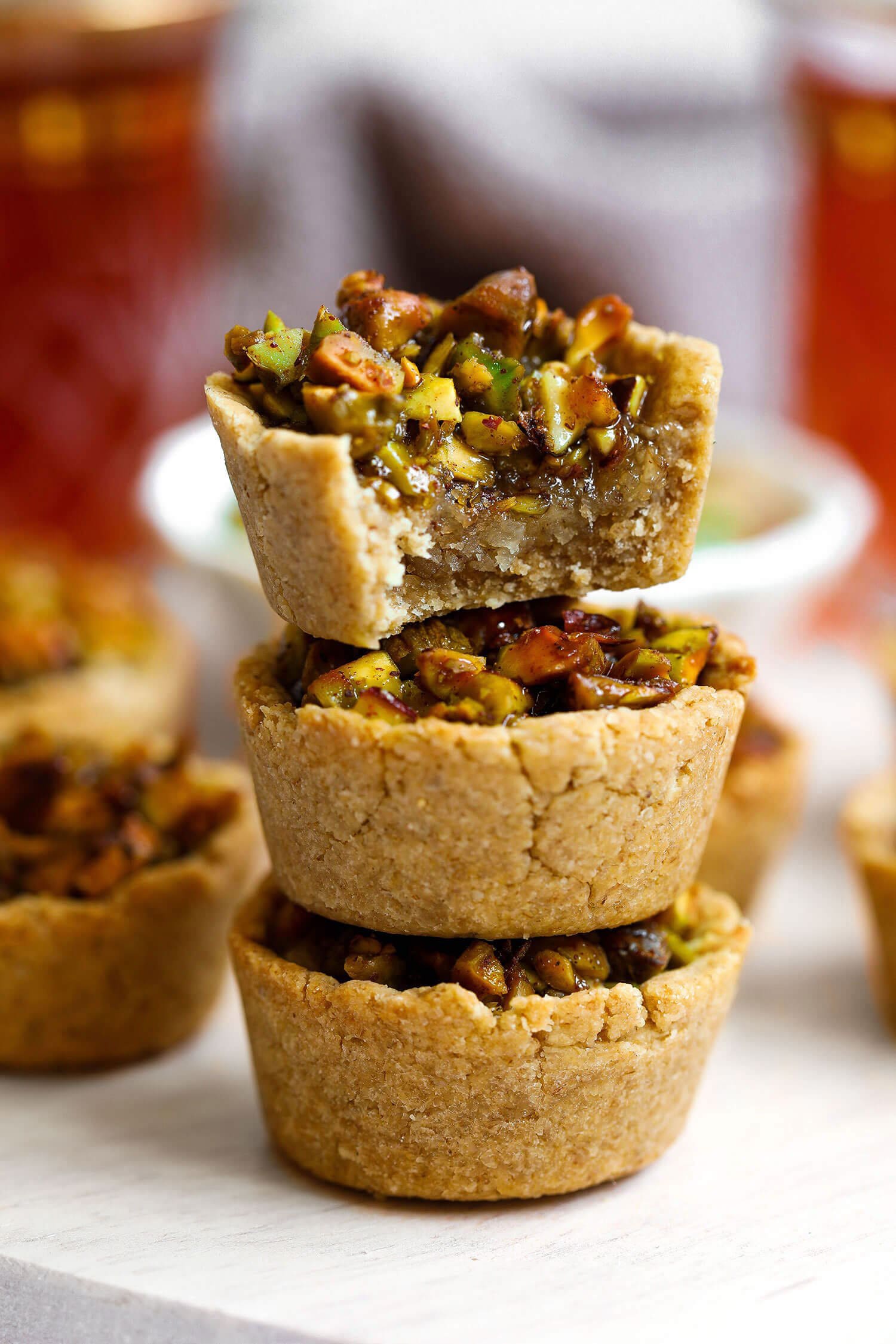 Baklava is probably the one dessert you’ll find served at every celebration in the Middle East or any Arab speaking country. It’s such a decadent dessert – one that is served to show hospitality & generosity.

Baklava is also the go-to dessert during the holy month of Ramadan as well as during Eid celebrations. They’re usually so hearty/sweet that I can only manage a couple of bites or a really small piece, otherwise it sits heavy in my stomach and I don’t like that feeling.

I decided to create a healthier alternative to baklava – one made with oat flour and ground almonds. Lightly sweetened with maple syrup instead of layers of pastry brushed with butter all drenched in sugar. This way they’re also vegan & gluten-free!

I created oat cups, filled them with frangipane and topped them with maple sweetened chopped pistachios. They may not look anywhere near like the ‘real thing’, but they definitely taste like baklava with the pistachios, cinnamon, cardamom, orange blossom & rose water. A much lighter/healthier version for you to enjoy!

I also made these healthier vegan baklava cups bite sized, perfect for a light post-dinner treat! 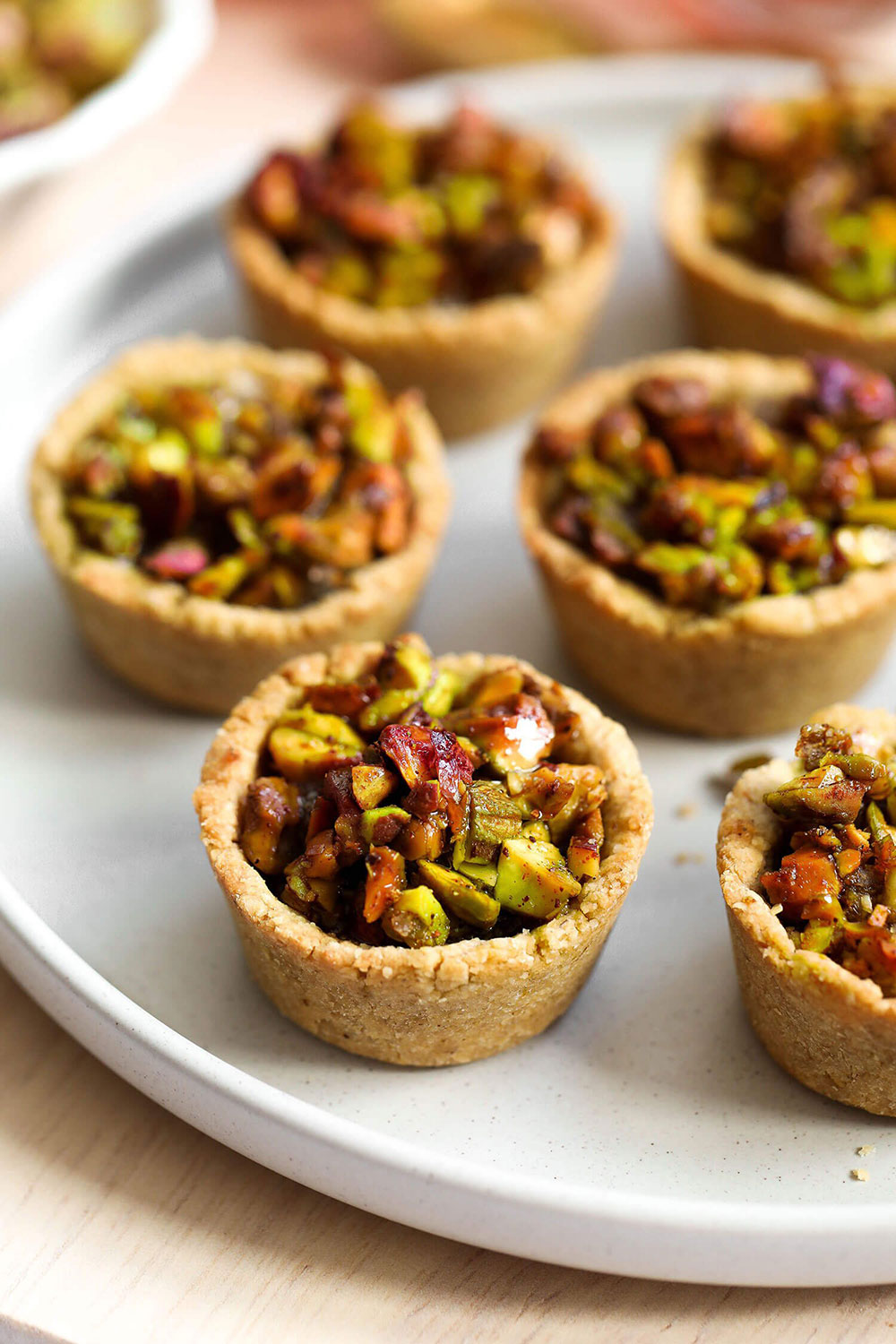 What you need to make these healthier vegan baklava cups:

Oats –  I almost always use oats in my baking as it works really well as a replacement for plain flour. They’re a lot more nutritious and higher in fibre. You can also use gluten-free oats to make a recipe gluten-free! I make my own oat flour by lending oats into a fine flour in a high-speed blender.

Maple syrup – I find using a liquid sweetener adds lots of extra moisture to my baking meaning I don’t have to use as much oil. I only used 4 tbsp (1/4 cup) of maple syrup in the whole recipe, which is A LOT less added sugar compared to the amount used to make real baklava.

Ground almonds – not typically used in baklava, however, I wanted to add an almond/frangipane layer in the middle to add some moisture without adding too much oil and syrup.

Coconut oil – mainly used to make the base. Also a little bit in the frangipane pan layer.

Pistachios – traditionally used to make baklava – pistachios are such an underrated nut in my opinion. They taste amazing when baked or roasted. They make the most delicious and crunchy topping for these cups.

Spices – I used cinnamon and cardamom to add lots of flavour!

Orange blossom and rose water – these are optional as I know they’re not the easiest ingredients to find, but definitely make these cups taste more like baklava. 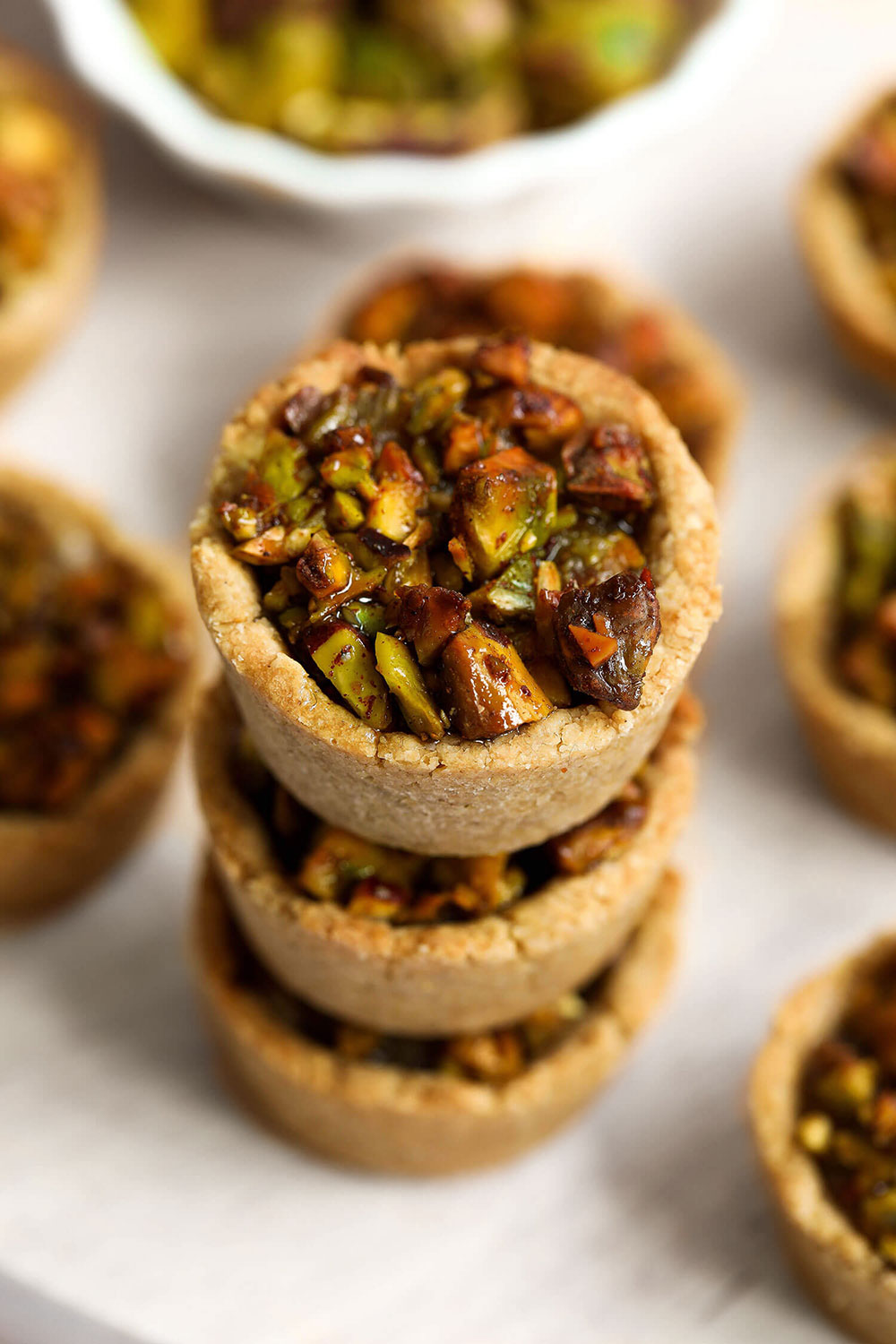 Why you need to try these healthier vegan baklava cups: 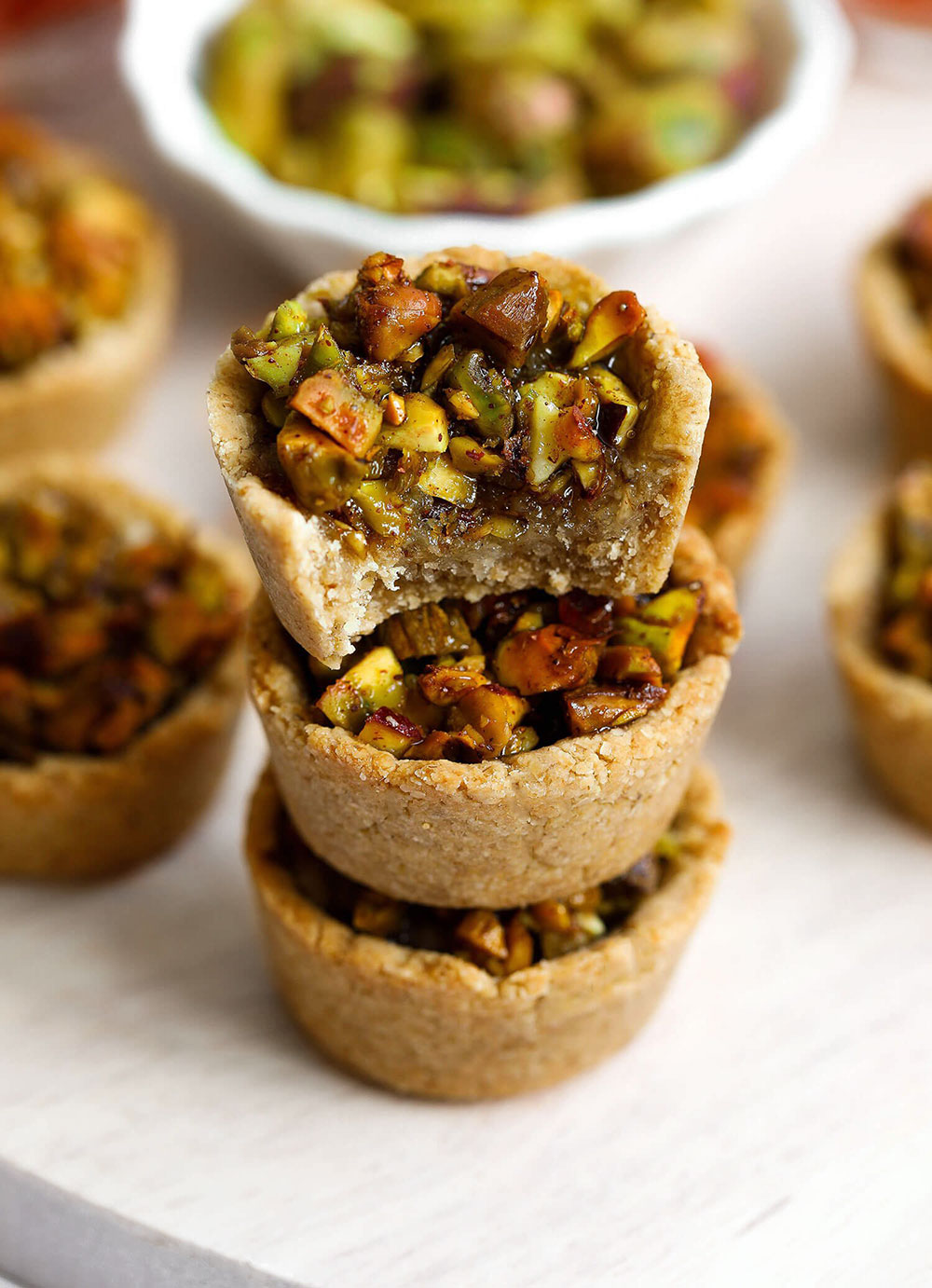 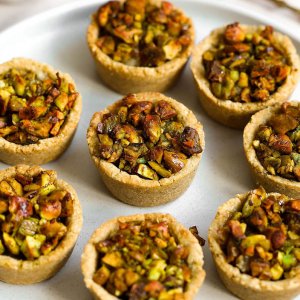 For the frangipane layer

For the pistachio layer

* oats blended into a fine flour in a high-speed blender. Use gluten-free oats if you’re allergic/intolerant to gluten. ** I've put the orange blossom water and rose water down as optional as I know they may not be easy to find for everyone. Most major supermarkets now stock rose water (either in the baking section or world food isle). You can also find them in Asian/Middle Eastern shops or even online. 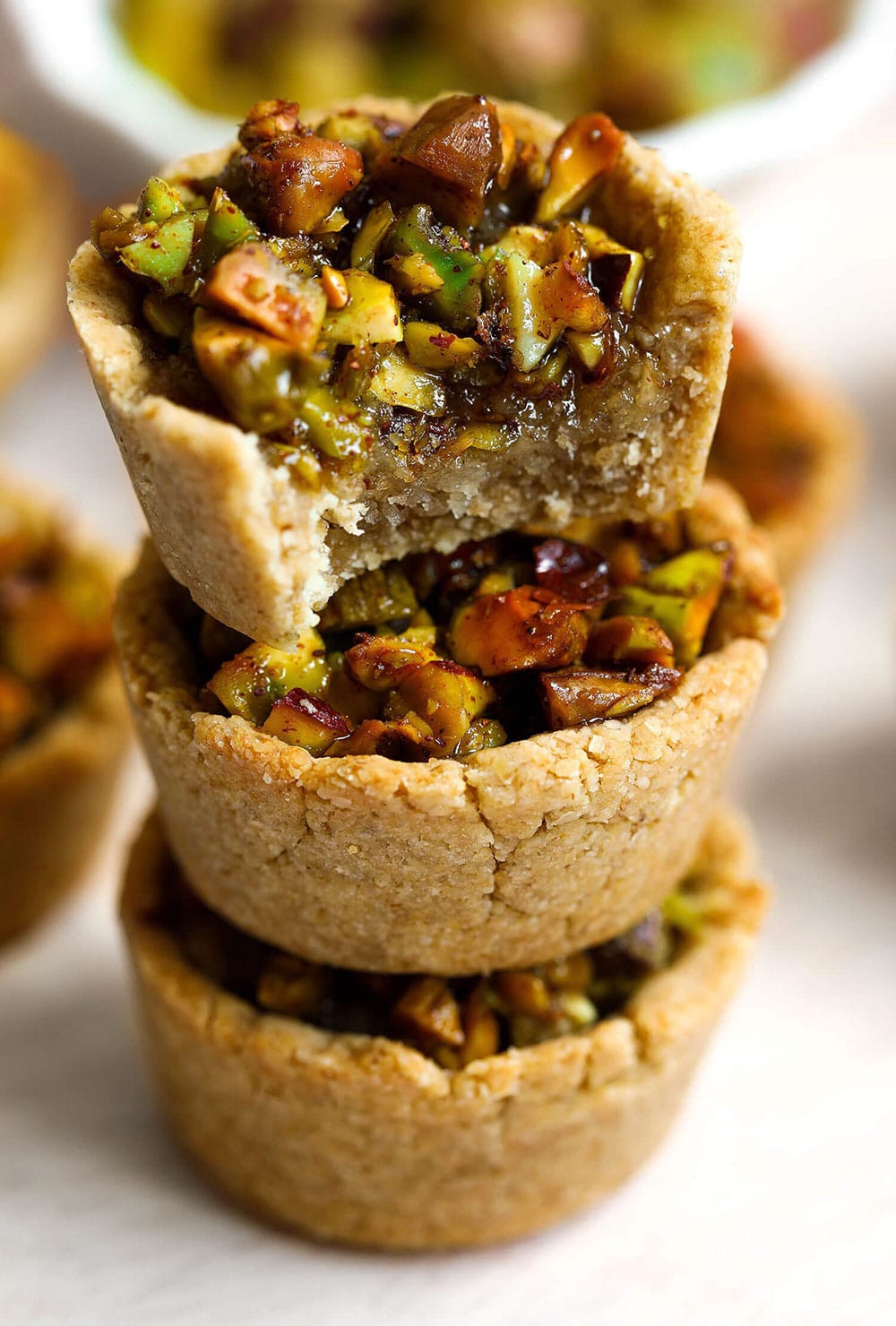